Update 02: Omandumba Guestfarm and Bushcamp during the Corona Crisis – Our current situation 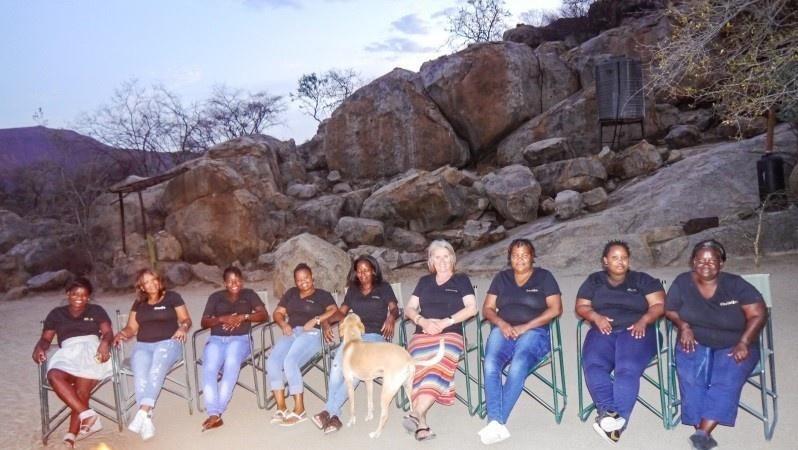 Here on our homepage we take with onto a virtual journey where we want to show you how we are experience these difficult times and where we want to supply you with regular news about Omandumba and its staff. With our stories and pictures of our everyday life we would like to send a bit of an Africa feeling to you. We know that many of you have or had to cancel your planed journey due to the current circumstances and hope to be able to bring closer a small piece of Namibia to you and to preserve or ignite the anticipation of your next Namibia safari. We will stay in contact!

The current situation – we are in the first weeks of July 2020 – is a roller-coaster of feelings. I would like to demonstrate this by using a recent trip we made as an example:

From here we could go on a day excursion into the Sossusvlei. We were the only guests... it was a wonderful experience and an indescribable feeling. Already on the way there and then again on our way back the realisation sank in fully…ALL lodges, accommodation facilities are EMPTY. As beautiful the experience of having the Sossusvlei to ourselves, as shocking was the sight of the many empty accommodations.  One is torn between the feelings! On the one hand Namibia, its nature is benefiting from the absence of so many tourists driving around...maybe some food for thought on how to continue.... and on the other hand the financial consequences, the unemployment... I think that we are not able to comprehend yet what really awaits us.

Since the last update the national lockdown has been eased further: up until 06 July travel throughout the country is allowed with the exception of the Erongo Region: residents of the towns Walvis Bay, Swakopmund and Arandis are only allowed to move within the town borders of these three towns and are allowed to commute between the towns but can’t visit the rest of the Erongo Region and the country.

So-called “essential services” and reasonable emergency are exempt from this rule if approved by the police. Reason is a concentration of infections in Walvis Bay (“hotspot”).

The international borders remain closed until further notice, which means still no international and regional tourism. But many lodges, guest farms and guest houses etc. are not able to survive on the local tourism.

Restaurants are open again, but everywhere on has to adhere to social distancing and to wearing masks in public.

By now we have about 300 people infected with the Corona Virus (only few show symptoms), 25 recovered and no fatality.

The situation is – apart from the actual virus – very unclear and confusing. Clear announcements from Windhoek do not exist, apart from the regulations regarding the lockdown. One remains silent when it comes to the overall economic situation; one ministry speaks about a 14-day quarantine period for tourists from outside when entering the country, another government department on the other hand states that it will work without quarantine. And then nothing is heard anymore. Amongst the people anger, frustration and hopelessness and also fear of the virus is spreading. Everybody tries to cope in his own special way.

Our “Omandumba-Situation” is as follows: Christian, our eldest, is supposed to go to Germany to start his apprenticeship. The so-called repatriation flights are announced, but then postponed on a short notice again – due to technical reasons. Information on flights is also unreliable and contradicting and more confuding than anything else.

Im Camp kochen Engelbertha, Meeke and Agnes are busy cooking prickly pear juice at the camp, the sale of which supports our cash flow a bit.

Meanwhile Harald together with Cleophas and Pieter are fixing up the campsites and are grinding the roads.

The fundraiser is continuing to develop well. The donation amount currently is at 5385Euro and has thus reached exactly two thirds of the aspired 8000Euro. Once again, we say thank you for each and every support from Germany, Austria, Switzerland and even Namibia.

Coming Tuesday the current lockdown regulations will expire, but we don’t know what further decisions will be taken.  Will some regions receive changes, maybe even relieves? We are excitingly looking forward.

Personally we are trying to keep our inner strength and to positively look forward.

Stay healthy, to be continued.

Your Family Rust and the Omandumba Team

Since the 04 May the national lockdown has been lifted to some extend and we have now entered Stage 2 of 4. Travel inside Namibia between the different regions is allowed again. The international borders remain closed.

At all public places wearing of face masks is mandatory, i.e. everywhere were people gather outside their home. The „social-distance“ of 1.5m must be adhered to.

Accommodation facilities like lodges, guesthouses, etc. ore allowed to operate with restrictions. Those who offer meals are only allowed to hand out food as “take away”. Another possibility is to say as self-caterers.

We at Omandumba have received guests sporadically at the Bushcamp and on the campsite since the beginning of stage 2.  During the past long weekend with a national public holiday we were able to host a lager self-catering group. Unfortunately, the income generated of hereof is still not enough to cover our running costs.

Currently Engelbertha, Agnes, Martha, Christina, Cleophas, Pieter and Wolfgang are at Omandumba.  Of the previous 10 Alexander and Meeke are momentarily at home and Thelma is on leave. We are very thankful to be able to continue running the guest farm with the full input of the remaining staff.

The fund-raiser is developing slowly but surely. We would like to thank all donors, regardless of the amount contributed, wholeheartedly! The current amount raised lies at nearly 3000 Euro.

On 02 Juni stage 3 of the lock-down is expected to start. We are confident that further relaxations of the national restrictions will take place, especially since the number of confirmed infections is still low – currently at 21. The newly infected people have all been re-entering Namibia from South Africa.

And we also hope that international visitors will soon be able to come to Namibia again. The current development in Europe, especially with regard to the lifting of international travel restrictions, allows us to look very positively ahead.

When we first heard about Corona we never anticipated that the situation could become this threatening to us. We only became aware of the possible consequences when Europe closed its first borders. At that time our oldest son Christian was in Germany for an internship. He manged just in time to get onto the last flight home before Namibia closed down its borders and international airport. We were thrilled to have him back, but it also demonstrated the severity of the situation to us. How should international guests get to us with the borders closed? When the national state of emergency was declared on 17th March, it became clear that we could not even hope for local guests anymore. For us this means that for an unforeseeable period of time we will not be able to generate an income.

Until the 24th of March we still had some guests on the farm. After having departed, we are now alone. On the 14th of March we already started talks with our staff, on how to continue. We realised quickly that we would not be able to occupy our 20 staff members as we used to. What to do?

In Namibia there is no such thing like state supported short time work or unemployment wage. Everybody has to fend for themselves and has to see how to get through the crisis. Although the government grands every citizen with a once-off payment of 750 N$ (approx. 48 EUR) per person, but this does not last long

At first we retrenched on person of every couple working for us. During the next days we however realised that the travel restrictions would go on for a long period and that our money would not be enough. Furthermore we have to treat everyone equally, meaning that we would have to retrench all or no one. On the 27th March we took the hardest decision of our life and dismissed all our staff. At the same time we offered everyone to stay on the farm and to receive a minimum wage and meat rations as long as possible

The lock-down came into place the same day and the Erongo Region was closed down. Without a permit we are not allowed to leave the area and no one is allowed to enter. A lot of our workers wanted to return to their families. The San of the Living Museum managed to return home just before the lock-down.

Due to the travel restriction many workers were not able to leave. Furthermore, worse living conditions than on the farm would await them at home. Thus about 10 workers remained at home. In this difficult time, it is important to stick together.

We came to a mutual understanding that the remaining staff would work half day for their normal wages. Thelma and Wolfgang are also still with us and see to that everything stays in order on the Guestfarm and in the Bush Camp. Our three colleagues Claudia, Cecil and Christina from the neighbouring Damaraland continue to receive their meat rations, but they are unable to come to us due to the lock-down.

The meat is retrieved from our farm. As we don’t have guests anymore, we don’t need much. We anticipate that we will need to shoot two oryx or zebras every three months. We hope that we can be self-sufficient as much as much as possible. Therefore, the vegetable garden is to be extended and our chicken just had some chicks. But the rainy season is coming to its end and the grass is already turning yellow. We had a total of 150 ml rain, which is a bit less than our annual expected average. It is getting drier again and we will be dependent on supplies from the supermarket. As Omaruru (ca. 50 km) and Swakopmund (ca. 180 km) are both situated within the Erongo Region we will be able to visit them once a month for our shopping. The adherence to the lock-down regulations are being strictly monitored by the military. The passages into other regions road blocks have been established and without a permit no one may enter. This is the case for example at Solitaire.

In Namibia there are currently (25.04.20) 16 confirmed cases of Corona, but there has been no official fatality. Of course, much less tests are being conducted than in Germany or other countries. The exact number is thus unknown. The few cases manly came from peolple returning from South Africa or Italy. We remain in close contact to our tour operators Pack Safaris and Chamäleon. These are trying to enable travel to Namibia again as fast as possible and take care of every individual case. However, their hands remain bound by the current situation.

Our neighbours and us are hence trying to support each other as best as possible. Of course everyone is contemplating how things will turn out and everyone has his moral low. But we will under no circumstances give up and we will use the time to implement new ideas on the farm and in the camp. Someday the borders will open again! We are looking forward to be able to welcome you then!

Stay healthy! To be continued,

Your Rust Family and the Omandumba Team

Namibia opens up for tourism
Support for the Omandumba Team

By accepting you will be accessing a service provided by a third-party external to https://www.omandumba.de/

Support for the Omandumba Team

Omandumba Guestfarm, has – as many other companies in Namibia – been hit hard by the Corona crisis. In fact the situation is precarious. Family Rust and the staff of Omandumba are now supported by Henning and Jana Bush through a fund-raiser by Betterplace

Here you can find more information: 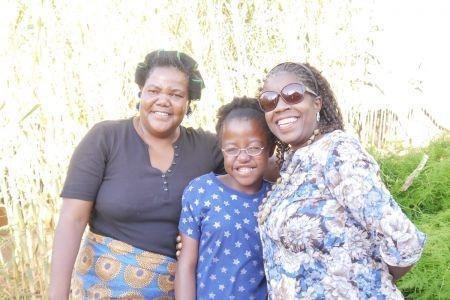 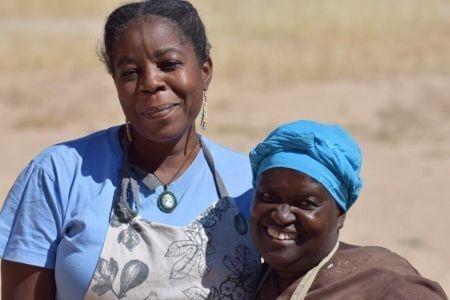 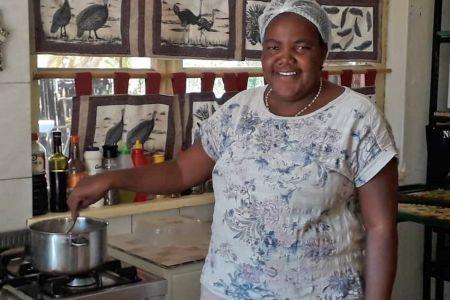