The Erongo and Omandumba

History and Present of the Erongo

The imposing granite landscape of the Erongo mountain range sets the backdrop for an impressive journey through the history and present of Omandumba. Geological major events like the rupture of the Gondwana Continent 130 million years ago, the life of the first people in the region 300.000 – 500.000 years ago, the 2000 – 4000 year old rock paintings of the hunter-gatherers and an over thousands of years consistent, fascinating flora and fauna....all this can be experienced up close and personal on Omandumba, may it be on guided excursions or on private hiking trails. At the end of an eventful and adventurous day there is hardly a better place to contemplate about the origins and history of humans and about life in this part of Africa than on an elevated sun-downer spot with grand views of the surrounding plains of the Damaraland. 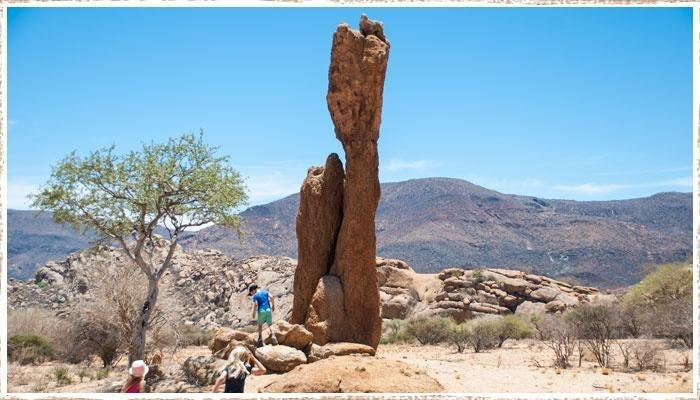 Farm Omandumba is situated just outside the north-western crater fringe of the Erongo Volcano, embedded in one of the most picturesque granite landscapes of Namibia. The today extinct volcano has a diameter of 40 kilometres and towers 1000 metres above the surrounding plains of the Damaraland. It evolved 130 million years ago. Back then a single, huge super continent covered large parts of the southern hemisphere: the so-called Gondwanaland. It consisted of the land masses that would later form Africa, South America, Australia, Antarctica and India. As the land masses started to drift apart, large quantities of magma broke onto the surface. Over many millions of years numerous, tremendous eruptions occurred until the volcano finally collapsed. Magma that arose afterwards did not reach the surface anymore. It collected within the earth’s crust and formed huge bubbles of liquid rock. Eventually these cooled down to form solid granite rock, which was exposed to wind and weather over millions of years. Thus, when going on a drive or on a walk on Omandumba, one can imagine oneself moving through rock formations that were once vaults of liquid magma buried deep within the earth’s crust.

Erongo in the rainy season

From hand-axe to picture wall

Since the forties of the last decade archeologic investigations have repeatedly taken place on Omandumba, which contributed essentially to the understanding of prehistoric Namibia. During this time German, and more recently also French and Namibian, researchers have collected exciting information, which is gladly shared with and, with the help of findings, explained to guests. Already 300.000 - 500.000 years ago humans roamed on Omandumba. They were belonged to the early human species Homo erectus. This is testified by findings of recently discovered hand-axes and splitting wedges. Archaeologists call this period the Early Stone Age. From the following period between 250.000 und 30.000 years ago, the Middle Stone Age, substantially more and richer places of findings have been discovered. They can be dated back to our own species, the Homo sapiens. He left his stone blades, scrapers and tips all over the farm area. During this phase the archaic Homo sapiens, started to develop culturally and anatomically towards modern man with new, more complex behaviour, a period that finally lead to the Later Stone Age: The people left specialised and complex stone tools at many sites on the farm, as well as uncountable rock paintings on the granite wall, artistic witnesses of the past, which, embedded in a grand landscape, bear more questions than answers, but still account for the fascination of Omandumba to a great extent.

Pics on the Rocks

2000 - 4000 years ago the ancestors of todays San left innumerous rock paintings on the granite walls on the farm. It can easily be more that 100 sites with many thousand single depictions. No-one has ever systematically counted them and new findings are regularly added. The depicted animals - springbok, kudu, oryx, giraffe and many more – originate from the world of the hunter-gatherers, which roamed the country in small groups. But they also depicted themselves, often genderless, often in motion, only seldomly at a certain activity like hunting. No-one knows why and some motives remain mysterious until today. It is certain though that they captured what their life consisted of – their surrounds and their mobile community. The feeling that a rock painting tour on Omandumba can give guests has never been better described than by the Prehistorian Henri Breuil in his1960 published book about the rock paintings on Omandumba:

This strange feeling to intrude into a world, which we, despite all the spiritedness of its pictures, will never fully be able to understand, always remained present within me as long as we were in the Erongo. It was as if in this solitary region a huge illustrated book had been left open, just to be forgotten and as if the key to its content had been lost.

Time travel into the torchbearer cave

Integral part on our daily conducted rock painting tour for guests is the visit to torchbearer cave, a rock painting site of special importance. In 1968 Herbert Wendt conducted archaeological excavations here. On the 22 m2 large excavating site he found approx. 30.000 stone artefacts. With an age of up to 3000 years these originate mostly from the Later Stone Age. Amongst the artefacts are numerous tiny stone inserts of arrow points and small scrapers. Utensils from bones as well as grinding and rubbing stones, some with colour pigments still attached, ostrich egg beads as well as pendants made of ostrich egg shells, schist and snail shells give an impression of the everyday life of the people. Apart from the heap at the entrance of the cave nothing can be seen from the excavation today. This does not go for the rock paintings, which count to the most beautiful in Namibia. The impressive picture frieze with more than 170 single motives is found inside the north-west chamber. Giraffes, ostriches, a herd of two dozen springbok and a quiver tree act as background for the numerous depictions of humans, who are distributed in groups or solitary over the whole wall.  The cave derives its name from a scene, which is not completely clear. A group of people walks towards a solitary figure, who is holding a burning torch in one hand and in the other a torch which is not ignited.